The common hammerhead shark (Sphyrna lewini) is one of the most important predator species that inhabits the waters of the tropical and subtropical regions.

This species of shark breeds every two years as soon as it reaches sexual maturity at eight years of age. It can be up to four meters long, and feeds mainly on fish, crabs, invertebrates and rays.

At an ecological level, this predatory species are very important for the reef ecosystem since it helps to control the abundance of fish and rays, maintaining a healthy marine environment. Actually, large predators tend to play an important role in the balance of marine ecosystems.

The shape of the head is the most spectacular feature of the hammerhead shark. Behavioral studies have shown that the head has multiple sensory pores that help them detect pressure changes in the water. This way it can detect the prey under the sand such as stingrays.

The hammerhead shark spends their early years near the coast, in wetlands and river mouths. At the age of four/ five, it migrates to the open sea and that is where they reproduce. Later, the female returns to the coast to give birth where they have a symbiotic relationship with the reef fish, such as angelfish or butterfly fish. They clean their wounds and parasites. 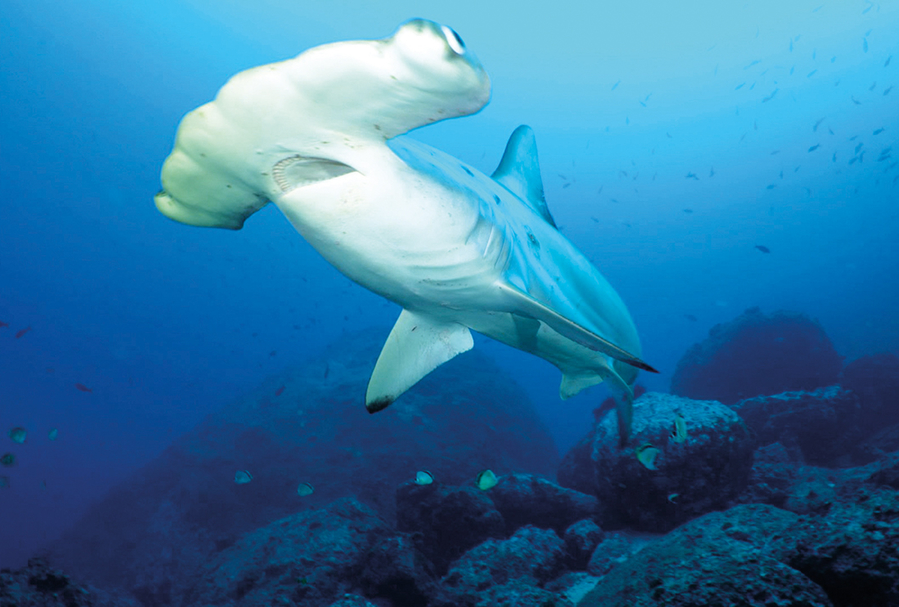 Currently, sharks from all around the world are facing a very serious threat as they are being massively hunted for their fins. The fin of the hammerhead shark is highly valued in the Asian market because it is considered to be of good quality and very fibrous, especially for traditional fin soups.

The hammerhead shark is one of the most threatened shark species, with global populations reduced by almost 90%. They’re listed in the second appendix of the Convention on International Trade in Endangered Species of Wild Fauna and Flora (Cites), this means that despite the fact that it can be fished, it cannot be exported.

We have to be aware of how sensitive marine ecosystems and their inhabitants are and what we can do to preserve the ocean’s biodiversity.
Small things like buying locally, not buying endangered species or endangered species from other countries, volunteering and raising awareness about endangered species have a huge positive impact on wildlife conservation.

Fin has been cut